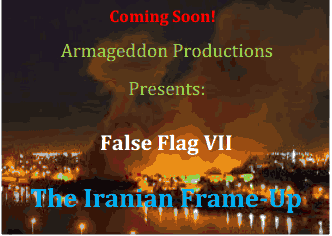 ENTERTAINMENT NEWS
Coming Soon to a Theatre of War near You!

The latest offering in the flagging epic series, “False Flag”, is this gem from Armageddon Productions Inc.

It is a sequel to the famous earth-shattering classics “Lusitania,” “Pearl Harbour,” “Gulf of Tonkien,”  “Twin Towers” and “Weapons of Mass Destruction,” plus the box-office flop, “Syria”, which failed to attract an audience because everybody was tired of the hackneyed plot.

In the wake of the “Syria” disappointment, the producers are hoping that “The Iranian Frame-up” will revive flagging interest in a series that many are saying has gone on too long and relied too heavily on endless re-hashes of the same predictable plot-twist while rumours circulate that the script writers have been fresh out of new ideas since 1941. A measure of their desperation to instil some fresh excitement into the tired series may lie in the planned sequel to the Iranian frame-up, a last-ditch attempt to win back the hearts and minds of a disillusioned public: “False Flag VIII: Alien Invasion.”

Loaded with special effects from the famous CIA-Media studios, The Iranian Frame-up is expected to be unleashed upon the world some time this year and break all box-office death records.  Its producers are as yet not giving away the exact date but thanks to leaked press reports in the Daily Scare and Washington Fibber, a small minority of some twelve hundred million citizens and other troublemaking elements are already queuing expectantly at fallout shelters across the world.

Featuring a cast of billions, it stars the bearded Iran as a country persecuted for refusing to build nuclear weapons whilst sitting on an oil pipeline. The story begins with our hapless hero accidentally provoking “The Banksters” - a sinister global crime syndicate - by committing a crime he did not commit and thus signing his own death warrant. This leaves the shadowy Banksters with no choice but to send in an Irish Communist Muslim hit man by the name of O’Bama, who suffers from a psychiatric disorder known as Military-Industrial Complex, to kill all his relatives and countrymen.

In False Flag series - named after the Bankster tradition of persuading other people to kill its enemies - the evil villains sink a battleship/assassinate one of their pals/blow up part of Israel/bomb an American City/take up Satanism and human sacrifice and then tell everybody Iran did it.

This causes people all over the world to believe everything they are told by people they know can’t be trusted, ignore all evidence to the contrary, then decide to kill lots of people who had done nothing wrong and finally start a war with China.

An exciting story unfolds with fast-paced action in which bus queues all over the Middle East and Shropshire are attacked by drones, the entire population of America is locked up for going on Facebook and asking for their Constitution back, babies wrestle with tanks, lots of people explode, thousands of people go mad and sacrifice their sons to the cause of punishing Muslims for believing in something other than hamburgers and drugs.

There is also a thrilling sub-plot in which the remorseless Banksters use realistic puppets known as “The Presidents” to makes millions of people explode whilst demolishing the global economy. In another gripping scene a large section of the Middle East is also demolished to make way for a state-of-the-art demolition site.

Critics are indeed saying that the “False Flag” plot has been done to death and audiences all over the world aren't dim enough to buy it a seventh time.  But the producers together with devoted fans of the time-honoured plot (Sid and Doris Madd of Klu-Klux, Kentucky) point out that many people have recently had their brains shrunk by the confections served in the foyer by the Drug-U-Like franchise and the consequent loss of long-term memory may help re-vamp the suspension of disbelief required for the plot to work.

The feature boasts many stunning special effects such as soldiers made to look and act like killer androids that  self-destruct, insurgents disguised as innocent bystanders, robo-politicians and various parliaments that look convincingly like real democracies.

It also features some very fine acting on part of some of the minor players: Britannia does a convincing job of appearing to not act on orders from Washington, actors from the Bilderberger and Illuminati Schools convince everybody their characters are sane and do not worship Lucifer, while the CEOs of several multinational corporations manage to convince a global audience that the destruction of Earth is vital for a thriving economy.

For those of you fed up with the whole thing and thinking of giving this one a mass, we are pleased to tell you that attendance is compulsory.

THE WORLD'S MOST EVIL BLOG 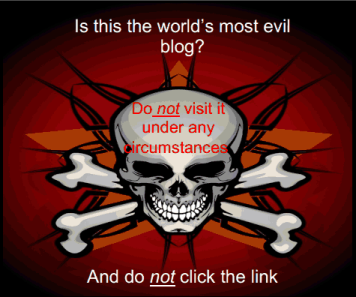 NOT QUITE SO EVIL BUT STILL FAIRLY EVIL FACEBOOK PAGE 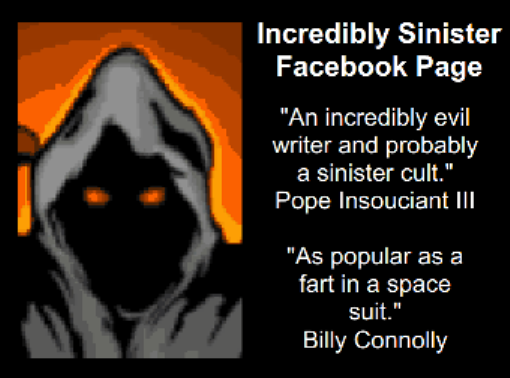 ADVERT BY AUTHOR DESPERATE FOR MONEY 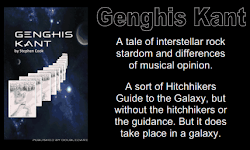